The Arctic Marine Biodiversity Network (AMBON) is a project supported by the National Ocean Partnership Program with funding provided from the Bureau of Ocean Energy Management and the National Oceanic and Atmospheric Administration. During an initial phase, field seasons were undertaken in August 2015 and August 2017 in the Chukchi Sea. A second phase is underway with sampling undertaken in October 2020 during a coordinated field program with the Distributed Biological Observatory. Katrin Iken of the University of Alaska Fairbanks is the lead principal investigator and we are contributing expertise in benthic ecology and biogeochemical drivers of biodiversity. The goal of the Network is to demonstrate and build an operational biodiversity observation network from microbes to high trophic levels in the context of climate change and anthropogenic influences. AMBON has four goals: To close current gaps in taxonomic and spatial coverage in biodiversity observations on the continental shelf; to integrate and synthesize past and ongoing research programs into an Arctic biodiversity network with publicly accessible data; to demonstrate how a sustainable observing network could be developed for this and other regions and ecosystems; to link with international biodiversity programs on the pan-Arctic level.

AMBON is one of six projects currently funded under the Marine Biodiversity Observation Network (MBON) program, which is a component of the Integrated Ocean Observing System (IOOS). 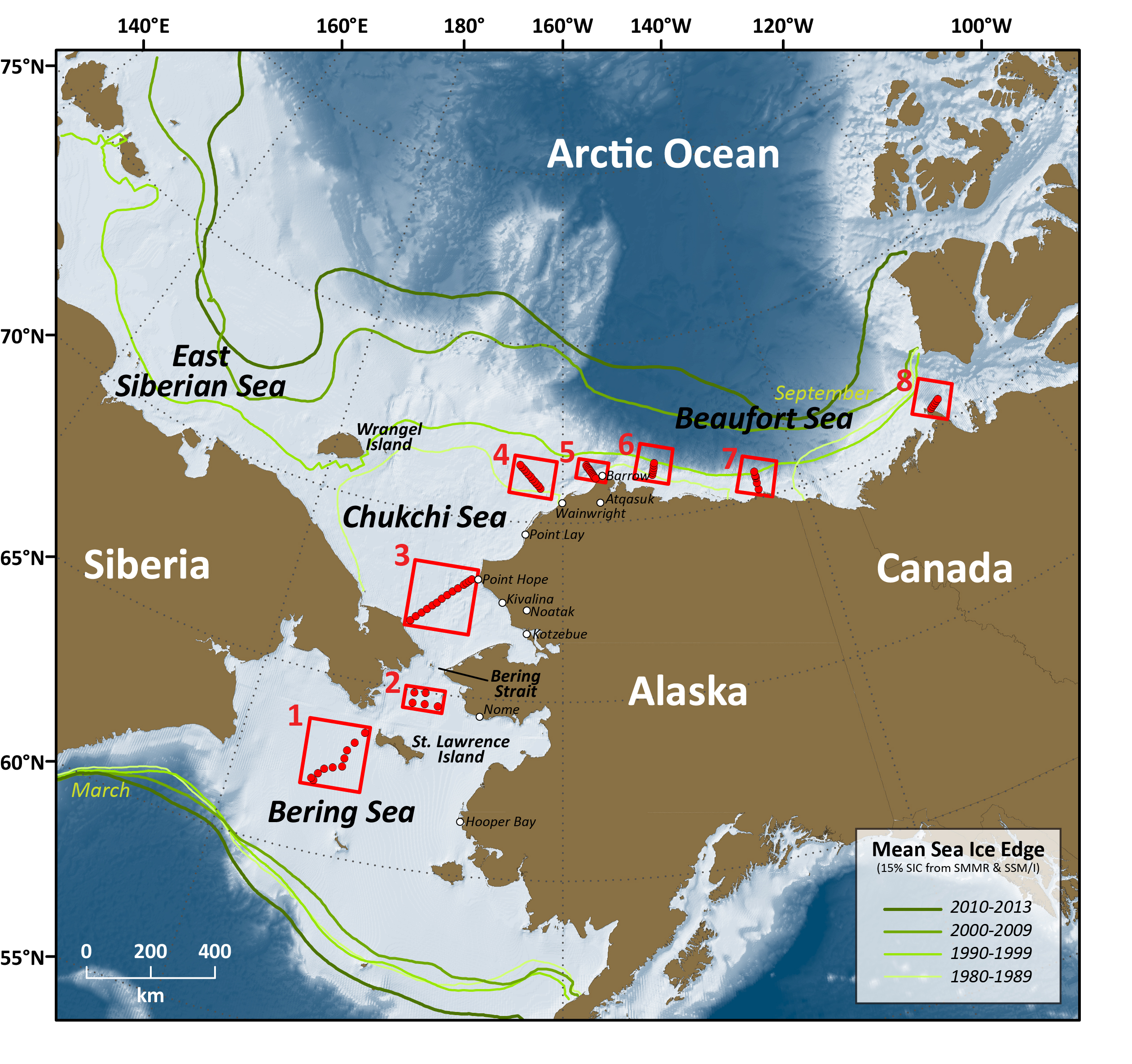 One of the pressing needs for evaluating climate change impacts on biological systems in the Arctic (and globally) is the need for sustained observations of changes in biological systems. Biological observations cannot be automated to the same extent as many physical measurements can (e.g. salinity on moorings, etc.). As a result, there is much less scientific documentation of how biological systems are changing and/or adapting as a result of environmental change. We were involved in a science planning process supported by the National Oceanic and Atmospheric Administration, National Science Foundation, the international Pacific Arctic Group, and the International Arctic Science Committee, to initiate more systematic biological observations in the Pacific Arctic sector. This has evolved into the Distributed Biological Observatory (DBO) which takes advantage of increased multi-national interest in the larger Bering Strait region. Jackie Grebmeier (jgrebmei@umces.edu) is the key contact for this effort and further information on the DBO effort can be found at the DBO website, https://dbo.cbl.umces.edu/.

Scientific results from the DBO project have been presented at a number of scientific meetings, including a special session at the 2018 Ocean Sciences Meeting that will be held in Portland, Oregon, USA from Feb 11-15, 2018. Submissions to a special issue of Deep-sea Research II on DBO scientific results are now underway.

With support from the National Science Foundation, National Oceanic and Atmospheric Administration. and Bureau of Ocean Energy Management, we have moved forward since 2013 with the DBO concept as a project incorporated into the Arctic Observing Network. Our annual NSF-funded work uses the Canadian Coast Guard vessel Sir Wilfrid Laurier and will continue annual long-term water column and benthic sampling through 2018, together with efforts to coordinate international sampling in areas of biological interest in the Bering and Chukchi Seas. The project summary of the proposal to support this effort is hosted on a National Science Foundation webpage and the work includes collaborators Bob Pickart (Woods Hole) and Karen Frey (Clark University). Addition support has been provided by NOAA since 2017 to undertake the northern Chukchi Integrated Study that is addressing other aspects of the DBO.

Other publications available at this link

Data obtained during the DBO effort are available at: http://www.eol.ucar.edu/field_projects/dbo (archived) and are now being uploaded to the NSF-funded Arctic Data Center.

The 5th DBO Data Meeting was held January 22-23, 2020 in Seattle, WA, USA. The final report is in progress and will published with presentations soon.

Presentations from the 2017 4th and 2016 3rd Distributed Biological Observatory (DBO) Workshops as well as the 2014 Pacific Arctic Group (PAG) Meeting (http://pag.arcticportal.org/) are posted below:

Dr. Monika Kędra from the Institute of Oceanology, Polish Academy of Science, is an international collaborator in the DBO, working with Dr. Jackie Grebmeier on benthic taxonomic issues. She has prepared a benthic taxonomic portal for organisms collected in the Pacific Arctic region. To access the site, see: http://www.iopan.gda.pl/projects/DBO/

US-Russia Census of the Arctic (RUSALCA)